If you’re a lifelong theme park fan, one whose favorite childhood or adolescent memories are full of good times in the theme parks, you will eventually face losses and changes in the places you hold dear. But fear not; this can be a good and healthy thing, if you go about it the right way.

You will experience several kinds of loss throughout your life, theme park fan or not. The best thing you can do for yourself is accept this and acknowledge that any type of loss requires a bit of grieving. Let’s discuss some of the types of loss that theme park fans encounter and what can be learned from it.

2017: the year of the announcements (and closures)

Every year at least one major theme park enterprise announces some new attraction or show. Some years bring more announcements than others, and more often than not these announcements mean closing down an existing ride or show. This is one of those years. Just to name a few, we’ve faced the loss of Great Movie Ride (a huge loss to Disney’s Hollywood Studios fans), Universe of Energy at Epcot,  and Dragon Challenge coaster at Universal’s Islands of Adventure. We’ve also faced smaller losses like Epcot’s Innoventions exhibits and SeaWorld’s beautiful hospitality house and Sea Gardens area (a big loss for me personally), and the closure of “Blue Horizons” dolphin show. There was also the closure of Wishes nighttime fireworks at Magic Kingdom.

All of these closures are to make way for something new and exciting. Each experience that replaces the last does seem to be an improvement, one that will draw more guests or increase guest satisfaction. But it is still a loss.

Each time an attraction’s closure is announced we see a major uptick in visitation to said attraction. Fans clamoring for their last chance to experience it, and proving that sometimes you don’t know what you got ’til it’s gone.

Be excellent to each other

I had considered writing on this topic of grief and loss in the theme parks for a while due to all the closures, but what pushed me to finally do it was the closure announcement of Universal’s Halloween Horror Nights’ signature show Bill and Ted’ Excellent Halloween Adventure. For fans of HHN, a strong and mighty sect of theme park fandom, this is a huge loss. 2017 will be the show’s “Farewell Tour” and I am sure this year’s show will be all the more special because of it.

But losing this show and the strong reaction to its announced closure, proves the emotions that theme parks fans have toward their beloved experiences. It is important for any level of fan to acknowledge those emotions such as sadness, disappointment, or even anger, and work through them. A grieving process is necessary in order to deal with any change that impacts your emotions, even on a small scale.

An often overlooked kind of loss is a change in the familiar. Something or someone does not have to completely go away in order for there to be a loss. Simply a change to something or someone you have strong familiarity with is a type of loss. A small bit of grieving is necessary here too.

We wants the Red Head! Pirates of the Caribbean seems to have gone through more changes over the years than any other classic Disney attractions. First it was women chasing pirates instead of the reverse, then a few changes over the years have been made to bring some of the movie franchise into the ride on which the movies are based. But the latest change has causes a lot of buzz among the online theme park community.

The auctioneer scene, the one in which a line of women are auctioned off one by one to a bunch of rowdy, drunk pirates (are there any other kind?) will now turn the tables. The much desired redhead will go from being the most fetching female on the block to the most brazen and bold, leading a pack of pirates in an auction of stolen goods.

There have been plenty of voices on all sides of this debate. And I am not here to say who is right and who is wrong (surprise, no one’s opinion is either right or wrong). My point in bringing this up is there were many voices on all sides that failed to acknowledge that this change represents a loss, even on a small scale. And thus those that had feelings of shock and loss may have felt invalidated or were made to feel they were wrong for not immediately jumping on board with this change.

It is important to acknowledge that other theme parks fans have different opinions and different feelings than your own. We must exercise some compassion to allow each other some time to work through their feelings.

Country Bear Jamboree at Magic Kingdom is probably not long for this world either. And that makes me sad. I think people like me in their 30’s and 40’s need to recognize that society and societal tastes are changing rapidly. This is something I have learned pretty quickly by being a fan of SeaWorld. 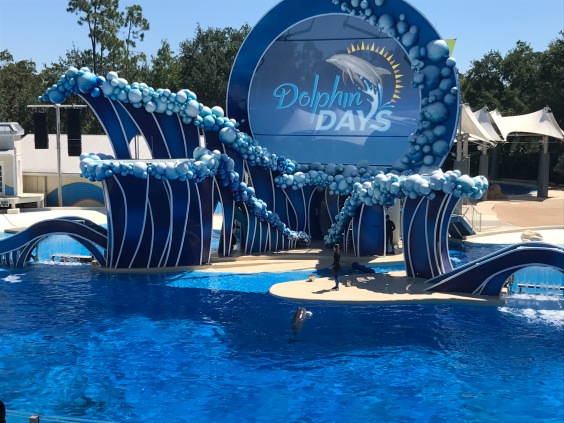 Attractions involving live animals are being challenged and many are finding it difficult to stay open. Just look at modern circuses; they’re all pretty much closed now. And people like me need to be allowed to grieve these losses. These experiences are ones we grew up with. I can easily credit SeaWorld with giving me a love and respect for the ocean and her inhabitants. It breaks my heart that it is misunderstood and misrepresented by so many.

This is perhaps the greatest challenge of growing older: accepting that your values will be challenged and societal standards will change.

The death of prominent members of the theme park community

The bigger the fan you are, the more susceptible you will be to being impacted by the death of someone in the community. The more you know about theme park history and the people involved in the world of theme parks, the greater probability you will experience a loss. The most recent and biggest loss for the theme park community is Marty Sklar. He was seen as the bridge between the imagineers and folks that worked directly for Walt Disney and those that started to come on board after Walt’s time. Marty was fierce and a heck of a story teller.

As we build communities with other fans we might become impacted by the loss of one of our own. Fellow fans and enthusiasts may also pass away during our time. The more involved you become, the greater the opportunity to experience loss. This does not need to be a bad thing. It is something that we must come to terms with and accept.

Death is perhaps our greatest inevitability. And as we lose celebrities that we look up to, fellow fans, and other members of the community it is our opportunity to acknowledge loss and process grieve. Perhaps over time with the right resources and the right approach, we become stronger and better equipped for life’s losses.

Change is the only constant thing in life

Fandoms of any kind deals with these types of losses at one time or another. Change is in our face now more than ever thanks to social media. “Disneyland will never be complete” a modified quote from Walt Disney, is dusted off every time there is a change to an attraction or a closure. I’d like to take this one step further…

“More will be revealed” is something I heard throughout my post-divorce counseling. Meaning that, life will continue to unfold. Gains and losses are all a part of experiencing life itself. The best we can do is to acknowledge that as long as we are alive we will encounter a constant ebb and flow of gains and losses. We must acknowledge the emotions that comes with both gains and losses.

So next time a change to a theme park, or anything else for which you have a passion, comes along, give yourself time to grieve the loss and accept the change. Use your fandom to teach you about the bigger picture. Enjoy the ride while you can.