I sat at my cubicle and gazed upon US Highway 192 at the entrance of Celebration. I longed to be back in the parks. The office job, albeit a Disney one, felt like a cage. I waited to hear back from my interview,… then they showed up. Two Dream Squad Cast Members drove from Epcot to the Celebration offices to share the news: I had been chosen to be a member of the final Dream Squad!

What is the Year of a Million Dreams?

At the beginning of 2007, Walt Disney World and Disneyland started one of the most beloved campaigns. It was also one of the first campaigns / celebrations to take place on both coasts. “The Year of a Million Dreams” made once impossible dreams come true for Disney guests, and the best dream of all was being a Cast Member who made it all possible.

Throughout all of Disneyland and Walt Disney World, including the four theme parks, the two water parks, Downtown Disney, and even Wide World of Sports, special prizes were given away to guests who were in the right place at the right time. The Cinderella Castle Suite at Magic Kingdom and the Dream Suite at Disneyland came into existence. A night in one of these lavish suites was given away every single day during the Year of a Million Dreams. Special Dream Fastpasses (one entrance for every Fastpass attraction in the park), special mouse ears, and pin trading sets became the most desirable accessories amongst Disney geekdom. It was also when the “where dreams come true” banner first graced both the Walt Disney World archway and the nametag of all Disney Cast Members… and six years later the signature tag line hasn’t left yet.

How did it work?

Although I can’t go into too much detail about the process of awarding the prizes, I can at least share a little insight. Each theme park had its own Dream Squad. Each day us Dream Squad members, or Dreamers as we lovingly call ourselves, would be scheduled for prize duty or to “Super greet”. Those on prize duty would follow the specific instructions for the day’s prizes. Essentially, if the prizes  being awarded as a batch to multiple guests at the the same time, like the special mouse ears or Dream Fastpasses, then guests would have to be in the right place at the right time, generally marked by a  landmark, unbeknownst to them, that they’d have to cross. If the prize was much larger and being awarded to one person, such as the night in Cinderella’s Castle Suite or a Disney Cruise Line vacation, the guest would have to be at the right place at the right time in an exact location that was extremely specific, such as a specific ride vehicle.

When we weren’t giving away prizes we were “super greeting”. Sometimes I enjoyed super greeting more than giving away the prizes. It was during this time I had freedom to make dreams come true that weren’t part of the giveaway. We were assigned a specific zone in the park and armed with our big black messenger bag with the Year of a Million Dreams logo on it. We engaged in conversation with whomever we liked. We also had magical moments we could create and really do as we wish.

Since I was an Epcot Dream Squad cast member, one of the simple but fun things I would do if assigned to Future World West is go play “hide and find Nemo”. I had a few “Finding Nemo” toys and would find little guests who were waiting outside for the rest of the party. After introducing myself, I’d hide the Nemo toys, and ask the little guest to go find Nemo. After a few rounds, it was their turn to hide Nemo and I would have to find him.  It was simple, but for the little guest and their parent, it was a blast and a chance to have some one on one attention from a Disney Cast Member. 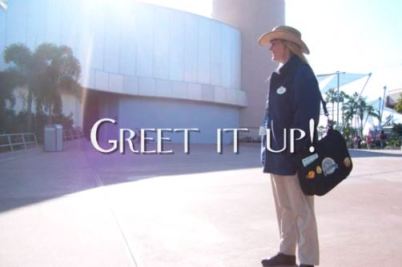 We would also act as a “human Fastpass” when we could. As long as it was okay with the attraction’s cast members, we could help a family enter an attraction through the Fastpass lane. I would look for families who had just missed the last Fastpass distribution of the day at Soarin’. They were easy to spot, walking hurriedly toward The Land pavilion, then they’d see the sign posted out front declaring the bad news that all the Fastpasses had been distributed for the day. Their faces and shoulders would drop. I’d give it a moment, then walk up and ask if they believe in magic. Almost every guest would hesitate and upon answering “yes”, I’d share the great news that I would walk them through the Fastpass entrance, and by the time it was time to board, the family would ask me to come along too! 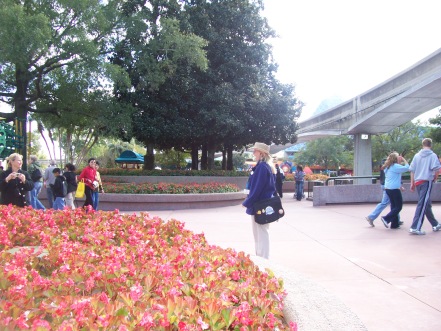 Most of all, when I was super greeting, I’d reach into my “bag of tricks” and give away buttons or pixie dust pins. Oh sure, the celebration buttons could be retrieved at Guest Relations, but if I came across a family who was celebrating something special and did not have a button, I’d make a big stinking deal about it. It’s your birthday? Then get ready for a loud mouth blonde to gather all the guests she could around you to sing “Happy Birthday” as I shower you with stickers of your favorite Disney character. It’s your anniversary? Then here’s your buttons and some stickers of Belle and Beast (to which I’d say “may your marriage continue to be more of a beauty than a beast.” now let’s get you a private boat ride on the Grand Fiesta Tour.

My Favorite Memories of Being a Dreamer

Now that it has been five years, to the month, since the final class of Dream Squad began their journey, I have been spending a lot of time thinking back on the amazing memories I made. Perhaps that is the greatest gift of being a part of this amazing experience.

In no particular order, here are some of my favorite memories: 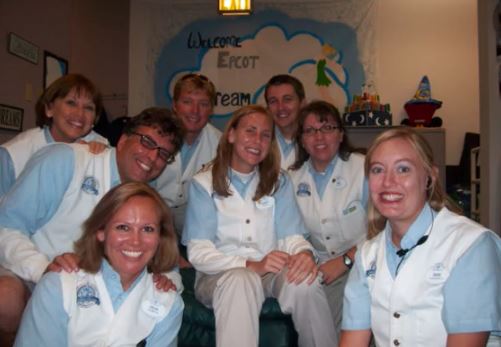 I met some amazing, lovely guests during my five months as a dreamer. And I got to work with the absolute best Cast Members across all of Walt Disney World. Sadly, the Dream Squad was a temporary position and once your time on the squad came to an end you returned to your former position at Walt Disney World. However, some areas could not hold your position depending on business needs. In my case, the aforementioned office job was also a temporary assignment to which I could not return. As the Year of a Million Dreams came to an end at the end of 2008, the economy tanked and Disney entered a hiring freeze. I was in a panic. What job would I have when this was over? Thankfully, the American Idol Experience was getting ready to open and I became an opening team trainer. In fact, many of the opening team Cast members at TAIE were former Dream Squad cast members.

There are dreamers all throughout Walt Disney World, and like me, some that are no longer a Disney Cast Member. But one thing is for sure, we all share a special bond and have some of the best memories for which anyone could ask.

8 thoughts on “An Inside Look at a Disney Dream Job: the Dream Squad”