What was once a dream of the Food & Beverage team at Disney’s Hollywood Studios‘ Brown Derby Restaurant is now a reality. The rumors quickly turned to truth and this past weekend marked the opening of the Brown Derby Lounge. Husband and I could not wait to go and I am happy to share our experience. 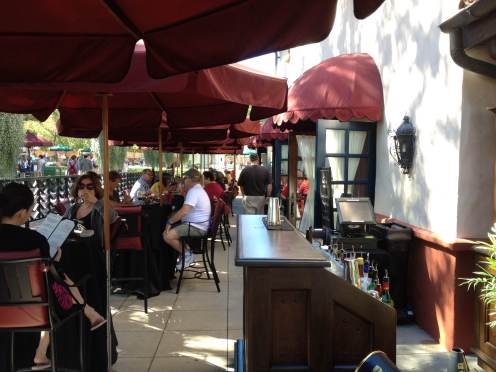 Know Before You Go

The first thing to note about the Brown Derby Lounge is that it is first come, first serve. The second thing to know is that it offers a unique drink and tapas style menu. This small, but mighty offering of tapas style food is perfect for nibbling and sharing. If you want the full Brown Derby Restaurant menu, well, that’s what advanced dining reservations at the actual restaurant are for.

The third thing to know is that it is all outdoors and subject to closure due to weather. We found this out the hard way when we went to Disney’s Hollywood Studios JUST to go to the Brown Derby Lounge only to find ourselves disappointed that it was closed for the entire day, even though the rain had let up.

We happily returned the next day in the early afternoon. Every single table was full, except for one or two located just inside the doors. The weather was gorgeous and we wanted to soak up the atmosphere of being in the middle of the park, so we waited. It should be noted that indoor seating is limited and may be closed off at any time or for the future. The B.D. Lounge is in its infancy and somewhat in a test phase, things can change. After waiting about 20 minutes a high top table opened up.

Browsing the menu, I immediately became delighted at the cocktail choices. Classic Hollywood glamour, and there are drinks named after the park’s beloved “streetmosphere” characters, the Citizens of Hollywood. We opted for the martini flight and the Ben Apetit (a light and lovely concoction of lemonade, gin, and other liquor). Each cocktail was lovingly made by a superb bartender, Aaron from England. He was marvelous and so friendly! Plus, he may have converted me from vodka martinis to gin! Also have to give props to our server, Danielle.

The martini flight consisted of a Grey Goose vodka martini, a Bombay gin martini, and a pomegranate martini. I suggest starting with the vodka martini as it has a lighter flavor, then the gin as it is garnished with an olive and has a stronger flavor, and finishing with the fruity pomegranate.  The Ben Apetit is pretty in pink, very cool, and refreshing. 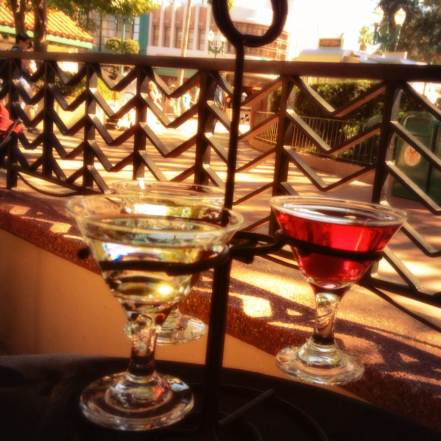 For nibbles the choices are limited, but each one sounded marvelous. We chose the sliders to start. Our eyes grew wide as the plate was laid in front of us. After I cut each one in half, husband and I each dove into our portion of the chorizo slider, with manchego cheese and onion straws. “Ohs” and “ahs” immediately escaped our lips. It is a tinge spicy but the cheese and potato bun are the perfect flavors to cool it down. Up next was the Wagyu beef slider. The flavor on this was much more mild and tame, slightly disappointing, but the veggies on top were crisp, fresh, and high quality. The hand made, light and airy potato chips made the perfect accompaniment.

We continued to sip on our beverages and drink in the atmosphere. Simply divine. I am a nostalgic fool, I just love the 1930’s and 40’s music and glamour. I felt right at home. I have to admit, it was also fun to watch other park guests walk by and gaze at us like we were someone special as we sipped our cocktails. The lounge area almost felt exclusive.

Up next and to close out, we ordered the cheese and charcuterie board. As the spread lay before us, “Moonlight Serenade” came on through the BGM (background music) and I was in heaven! “This place is going to be nuts during the holidays,” I thought. The charcuterie board offered three cheeses and three cured meats. The cheese selection was marvelous, the meat left a little to be desired, and the pickles were awesome! Still, it was perfect for nibbling and sharing.

I have to admit that Disney’s Hollywood Studios is my least favorite Walt Disney World theme park. However, after a delightful afternoon of cocktails and conversation at the new Brown Derby Lounge, I have found something more to attract me. Simply put, a star is born! 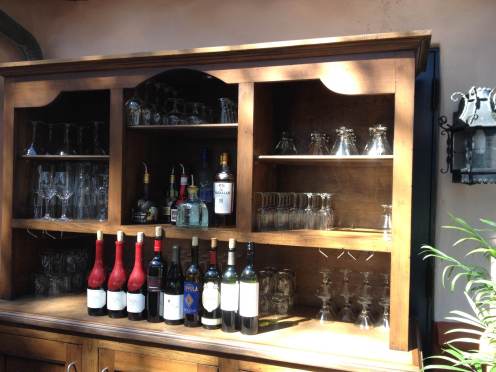