Truth be told, I have not been to Winter Garden since before I was of age to really remember anything. I put my best Disney pal in charge of the dining arrangements and she didn’t disappoint. As Blue Jean Baby and I pulled onto Plant Street, into downtown Winter Garden, my eyes grew to the size of saucers. So much of downtown Winter Garden reminded me of my favorite parts of Sanford and Park Avenue. And yet this place had a charm all its own.

We met up at Moon Cricket Grille. As I stepped inside I was immediately taken back by the warm welcoming character. The natural wood accents and large, solid wood bar added a rustic feeling. Little trinkets, knick knacks, and a few old Florida signs filled the walls. A live musician strummed his guitar and sang classic rock and a few country songs, adding a friendly ambiance and a depth to our dining experience. 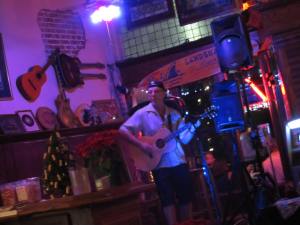 I ordered a true Florida original: a grouper reuben paired with a Landshark – I just couldn’t resist. The service had a few slow points here and there, but the atmosphere, food, and friendly conversation certainly made up for it. If I found myself in the area again, I would return for a bite and a pint at Moon Cricket.

Just one little block away, the Garden Theater welcomed the fun loving audience made up mostly of Walt Disney World Cast Members, former Cast Members (like me), and their friends and family. Encore is a performing arts group made up of Walt Disney World Cast Members. Auditions are held and performance are produced throughout the year. The proceeds from each performance benefit a selected charity. You can read about my experience with Encore’s “Finding Wonderland” here.

This evening’s performance benefited the Second Harvest Food Bank. The evening proved to be quite unique. Not only was this the first time that I could remember Encore performing off of Disney property, but the quaint Garden Theater was experiencing a run of bad luck. A car ran into the box office earlier (no one was hurt), and as we shuffled into the theater, ready for the show to begin, we were soon asked to calmly evacuate the theater.

We gathered around outside waiting to learn what had transpired. The Stage Manager announced that they smelled smoke and evacuated the theater as a precaution. She asked that we give them about thirty minutes to determine the situation and invited us to stroll along Plant Street. With red wine in hand, we strolled. We then heard a choir singing and followed the harmonious sounds. Sure enough, Conductor Clay Price lead the Encore choir in a round of Christmas carols. It was one of those unexpected, spontaneous moments that just make spirits bright.

After enjoying classic Christmas carols and laughter, we were welcomed back into the theater. What followed filled the entire audience with good cheer. I couldn’t stop smiling as I watched people that I had the pleasure of working with once upon a time sing and entertain the crowd. The two hosts of the show had me in hysterical tears at a few points. Their comedic timing, jokes about Disney, and impromptu skills coupled with the glorious singing of the Encore choir made the night delightful. The cast members weaved jokes and puns about fire, smoke, and hot firefighters throughout the performance to the glee of the audience. We were even treated to an on stage marriage proposal! 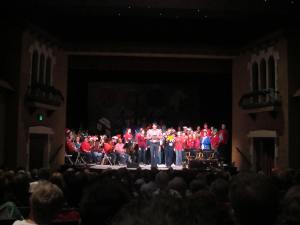 At the start of the evening, as I left the office and headed for Blue Jean Baby, I groaned and grumbled. This evening would be my last chance to visit a Disney theme park with my best Disney pal before her move back to Pennsylvania and for fear of rainy weather we made other plans. However, from the moment I set foot in Moon Cricket Grille to the standing ovation, I relished it all. Spending an evening laughing, singing and enjoying the unique community of Disney Cast Members past and present all while supporting a good cause is most definitely a treat.